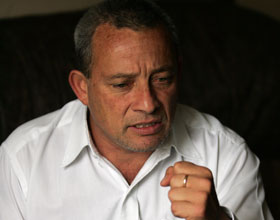 Ricardo Soberón Garrido is a Peruvian lawyer. He is one of the founders and the former director of the Drugs and Human Rights Research Center (Centro de Investigación “Drogas y Derechos Humanos”) in Lima. He holds a Masters in International Relations from the Peace Studies Department of the University of Bradford in England. He is a university professor, and an analyst and consultant on drug policy and drug control issues in the Andean region, as well as on border and security issues. He is also an advisor to rural coca-producer organizations. Soberón is the author of numerous books and articles about drugs, justice, and border issues. On August 5, 2011, he was appointed to head the national drug control commission, Comisión Nacional para el Desarrollo y Vida sin Drogas (Devida). In January 2012, while questioning ineffective all-out coca crop eradication efforts that put him at odds with the Cabinet chief and prompted concern by the U.S. Embassy, he was replaced after a government reshuffle.