Therapeutic Use of Cannabis by Crack Addicts in Brazil 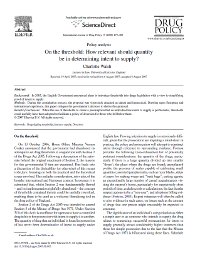 This study ensued from clinical observations based on spontaneous accounts by crack abusers undergoing their first psychiatric assessment, where they reported using cannabis in an attempt to ease their own withdrawal symptoms.

Throughout a period of nine months, the researchers followed up on 25 male patients aged 16 to 28 who were strongly addicted to crack. Most of the subjects (68%, or 17 individuals) ceased to use crack and reported that the use of cannabis had reduced their craving symptoms, and produced subjective and concrete changes in their behavior, helping them to overcome crack addiction. The authors discuss some psychological, pharmacological and cultural aspects of these findings.